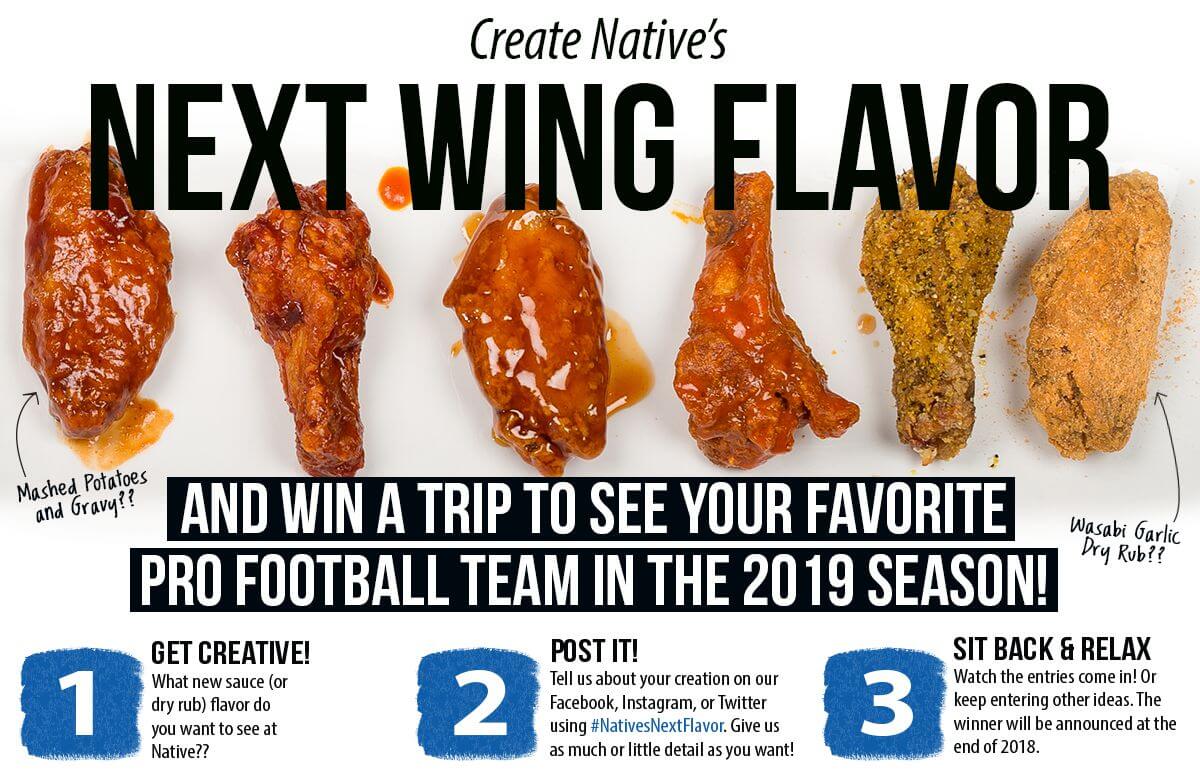 The following are basic rules governing the “Create Native’s Next Wing Flavor” Contest, hereby known simply as Contest. In the event that no other rules are published, the following rules will apply. All Contests are void where prohibited by law.

Prize(s). The winner of the Contest will win a trip to one 2019 pro football regular season game, within the United States, of his or her choice. The prize(s) that may be awarded to the eligible winner(s) are not transferable, redeemable for cash or exchangeable for any other prize. Participants must provide valid and accurate contact information. If a winner cannot be contacted or is disqualified for any reason, Native Grill & Wings reserves the right to determine an alternate winner or not to award that winner’s prize, in its sole discretion. Winner must select the game they would like to attend by June 1st, 2019 or will forfeit the prize.

Eligibility and Limitations. Participants and winner(s) must be U.S. residents. No limit of entries per person. Only one (1) prize per household for the Contest.  Winners must be 18 years of age or older. Employees of Native Grill & Wings, the Contest’s participating sponsors, and their advertising agencies, and members of the immediate family of any such persons are not eligible to participate and win. The term “immediate family” includes spouses, siblings, parents, children, grandparents, and grandchildren, whether as “in-laws,” or by current or past marriage(s), remarriage(s), adoption, co-habitation or other family extension, and any other persons residing at the same household whether or not related.

Entries. Only entries submitted through Facebook, Twitter, or Instagram using #NativesNextFlavor may be used to enter the Contest. Winner will be selected at Native Grill & Wings’ discretion from all entries received. If more than one entrant has the same idea for a wing flavor, the entry submitted earlier (based off social media time stamps) will be deemed first. Winner, along with other entrants, forfeits ownership of the winning wing flavor, with all recipes and names becoming Native Grill & Wings property.

Publicity; Use of Personal Information. By participating, where allowed by law, all participants and winner(s) grant Native Grill & Wings exclusive permission to use their names, characters, photographs, voices, videotape, and likenesses in connection with promotion of this and other Contests and waive any claims to royalty, right, or remuneration for such use. By participating in the Contest, where allowed by law, participants agree that Native Grill & Wings may disclose personal information obtained from participants in the Contest to third parties and use such information for marketing and other purposes.

Disqualification; Fraud. Failure to comply with any published Contest rules is grounds for immediate disqualification from the Contest. Native Grill & Wings reserves the right to disqualify any entry not conforming to the rules of the promotion at any time. Native Grill & Wings and its Contest and promotional partners assume no responsibility for entry fraud committed by any entrant. In the event it is determined that an ineligible entrant wins a prize, Native Grill & Wings reserves all rights to the ownership and return of the prize and all costs associated with remedying any prize award to an ineligible entry or entrant.

Misinformation. Native Grill & Wings is not responsible for undeliverable, lost, delayed, misdirected, non-hashtagged, or misaddressed entry or any other issues regarding the electronic delivery of the participant’s entry.

Compliance with Law.  The conduct of the Contest is governed by the applicable laws of the United States of America, which take precedence over any rule to the contrary herein. Native Grill & Wings shall follow the applicable laws for conducting Contests.