The history of Native Grill & Wings, according to managing partner Jason Prout at the new Tulsa restaurant, started in 1979 when the founding Anderson family made its way from Buffalo, New York, to settle in Arizona.

“The story goes that they moved there to open a pizzeria and called it the Native New Yorker Restaurant,” said Prout, a veteran Tulsa restaurateur. “When the pizzeria started failing and since they were from Buffalo, where wings began at the Anchor Bar, they went and bought a bunch of wings and started selling them in Arizona. They became very popular and successful with the wings.”

Regardless, the chain made its entry into Oklahoma about three weeks ago in a new building that sits in front of Cinemark Tulsa theater and behind Smashburger and Chuy’s on the south side of 71st Street.

It’s a sports bar-styled restaurant with banks of big-screen televisions that are easy to see anywhere in the dining areas. Two large screens over the bar can show up to four games each at one time, a handy thing to have as football season gets under way.

Wings are the big stars here with 21 flavors, including seven dry rubs and 14 sauces. They range from mild chicken n’ waffles and asiago Parmesan to spicy hot habanero mango and The Ghost. 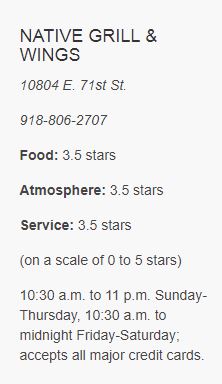 Our table ordered a 15-pack platter ($15.99) with five salt and vinegar, five honey hot and five honey barbecue. The bone-in wings were tender and meaty, and the latter two flavors had a little kick to them. They came with celery sticks and a good, creamy ranch dipping sauce.

The menu has enough variety to satisfy most tastes. It includes stone-oven pizzas, flatbreads, salads, burgers, sandwiches, appetizers, sliders and a couple of fish entrees.

In addition to wings, we also had the hangover burger ($10.99) and an order of sliders (two for $6.49), and both came with tasty seasoned fries.

The hangover burger, served in a paper-lined wire basket, was almost too thick to eat by hand. It included a ground beef patty, hardwood-smoked bacon, hash browns, fried egg, avocado, lettuce and pepper jack cheese. The combination of the bacon, egg and avocado made it a burger to remember.

The sliders turned out to be a good bargain. We chose barbecued pork and Native sliders. The former held a generous serving of shredded pork with pickle slices and honey-barbecue sauce. The Native was a basic, small burger with ground beef, cheddar cheese and pickles. Both were served on soft brioche buns.

Other slider choices included meatball with marinara sauce and mozzarella cheese, and chicken-fried chicken with lettuce, pickles and mayo.

I substituted onion rings for the fries with the hangover burger for an extra $1.99. They were medium-sized and OK, but I might just stick with the fries next time.

I almost ordered the fish and chips, but instead of that, I think I would like to return on a Friday for the Friday Fish Fry, which includes a 13-ounce, beer-battered haddock, served with fries, tartar sauce and lemon for $12.99.

A menu for ages 12 and younger includes a grilled chicken breast, four-pack wings, kid-friendly strippers, grilled cheese, mac-and-cheese or slider for $3.99 to $5.49. They come with a fountain drink or milk and choice of one side.

Our server, Christina, was hard-working, friendly and seemed well-versed on the menu.